This book really reignited my love of theatre, Ive always adored the theatre, I mainly visit to see musicals, Musical theatre has a big place in my heart, I grew up taking part in musical theatre summer schools so it’s always been something I have loved. I am not very talented at all, but it was always just the being part of the show, even in a tiny little role that I loved.

One particular musical stands out as my favourite, Les Miserables, we did a production when I was about 8/9 maybe 10, and even though back then I didn’t really understand it or have a massive part I just fell in love with the show. Watching from behind the scenes and getting ‘dirtied’ up in the make up chair to play one of the beggars on the streets was spectacular to me, I just loved every minute.

Since then I’ve been lucky enough to see Les Miserables on the Westend three times and another three times in various places in Belfast where I live. It never grows old to me, I love the magic of getting lost in what’s going on onstage.

Another main reason I love musical theatre is an actress that I fell in love with the first time I saw her in Les Mis, Carrie Hope Fletcher, it’s amazing how a person can instill a love for something in you, I’ve seen everything she has been in since and loved every bit of every show, she is incredible and brings such life to her characters.

I’ve been to the theatre many many other times, I don’t just limit myself to Les Mis! Ha! Naming everything that I have enjoyed watching at the theatre would be near impossible.

There really is something magical about a night out to the theatre, especially with good company! Watching something come to life onstage is truly one of my favourite things in life. 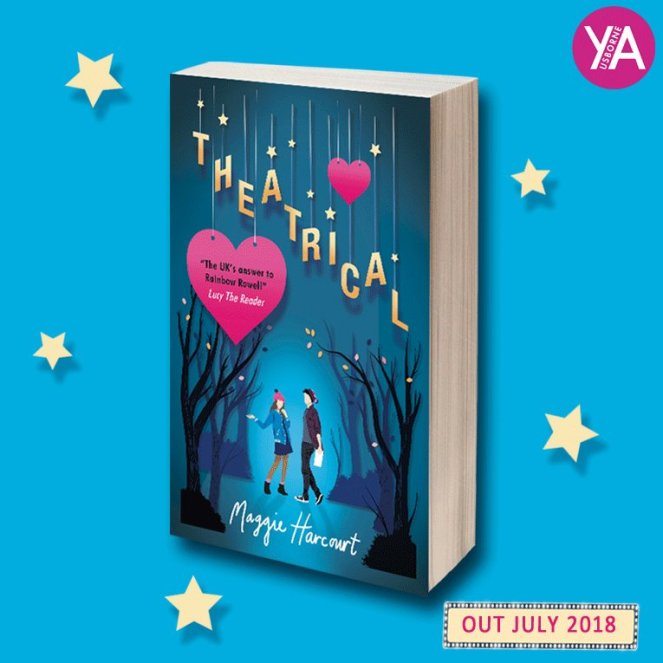 Hope dreams of working backstage in a theatre, and she’s determined to make it without the help of her famous costume-designer mum. So when she lands an internship on a major production, she tells no one. But with a stroppy Hollywood star and his hot young understudy upstaging Hope’s focus, she’s soon struggling to keep her cool…and her secret.

YA romance and theatre mixed together? Let me tell you it makes for a fantastic read! I knew I was going to love Theatrical as soon as I read the blurb when Stevie from Usborne sent me the press release, of course I said yes to being on the blog tour! I honestly didn’t expect to love it quite as much as I did.

Theatrical follows Hope, a teenage girl who dreams of working backstage at a theatre. Then she is offered an internship at one of the most prestigious theatres working backstage as an assistant stage hand. Hope however hasn’t told her family, her mum is a very famous name in the theatre world, a hugely popular costume designer, and feels like Hope could do better, but Hope wants to do this on her own, without her mother’s name to get her places.

Hope however begins to feel out of her depth when she starts the internship, not only is it hard going but she has so many secrets to keep, as well as not telling her family what she is doing, she has to sign a confidentiality clause and can not speak about the show that is being rehearsed, there are famous faces and awkward encounters everywhere.

And then she meets Luke one of the smaller actors in the play, a theatre student who also works part time at the Earls. And if she thought she out of her depth before, she’s definitely is now…

The book, in my opinion was everything that a good YA romance should, it was cute, there was a little bit of drama, there was glimpses of wonderful friendships and of course the romance.

Hope was a brilliant character, she was determined but also an awkward teenager, I loved reading all the little blunders that she made, honestly she was a bit like me when I was a teen, her rambling and awkwardness were really endearing. Her interactions and developing relationships were written so well, I really loved the friendship between her and George, it blossomed quickly, just how I imagine it would when working in theatre, the long hours and time spent there must really create a bond between coworkers.

Hope keeping the secret from her family was a fantastic idea, I loved how much I could tell that she wanted to do this on her own, even though it would have been easy to get her mum to help. I personally think that her family dynamics were very realistic, from the sort of distant relationship with her mum to the rocky relationship she had with her sisters.

And then the romance, I’m not going to spoil everything and even mention details, but ah, I think this is one of my favourite YA couples, their budding relationship was so cute, the fake stage in the management office literally had me swooning.

The amount of effort and research that was put into writing this book shined through, I could incision the whole theatre and production while I was reading, I’ve been to quite a few theatre shows and musicals and did a little bit of summer shows when I was younger, I just adore everything about the theatre, this book was a really wonderful addition in YA literature, not something that is often written about.

The dialogue and interactions were great, the book flowed perfectly, it was a larger book than most, I loved that, I read really easily and I enjoyed every bit of it.

Check out all the rest of the stops on the tour, thank you to Stevie at Usborne for sending me a copy of Theatrical! I loved reading it!

7 thoughts on “Theatrical by Maggie Harcourt”