Tormented throughout middle school, Ellie begins her freshman year with a new look: she doesn’t need to be popular; she just needs to blend in with the wallpaper.

But when the unthinkable happens, Ellie finds herself trapped after a brutal assault. She wasn’t the first victim, and now she watches it happen again and again. She tries to hold on to her happier memories in order to get past the cold days, waiting for someone to find her.

The problem is, no one searches for a girl they never noticed in the first place.

TE Carter’s stirring and visceral debut not only discusses and dismantles rape culture, but it also reminds us what it is to be human. 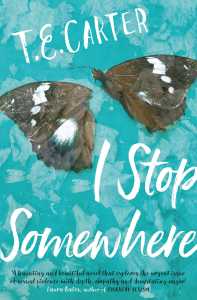 This was one of my most anticipated books of this year, I knew I wanted to read it as soon as I heard about it, I was pretty much counting down to its release.

I found this review so tough to wrote because I thoroughly enjoyed this book, but it was so different from any book I’ve read before, told in the perspective of a ghost, it was chilling and sad and such a powerful read. So yes, the review was hard to write and took me a long time after I finished because I just couldn’t put it into words. I wanted to make sure I did it justice.

I Stop Somewhere deals with rape and murder, subjects that I find not really explored in YA, especially in the way they were in this story, I do imagine it could be quite triggering or hard to read for quite a few people. But the way it is told and written was wonderful and so necessary for the story. It really came to life in my head.

Whether you read or particularly like  ‘dark’ stories such as I Stop Somewhere , or you don’t, it cannot be denied that they are very necessary in the YA genre.

They are necessary because nobody can or should live their life pretending that bad things don’t happen, unfortunately topics such as these happen in our world, and I personally think they are not explored enough in this genre, I don’t mean in overly gruesome ways, but the way they were in I Stop Somewhere. This book was realistic and I personally think that was the scariest part, obviously not the ghostly POV, but what happened to Ellie and how everything played out afterwards.

Ellie was a young girl with a single father who just wanted to be loved, she wanted to belong somewhere, coming from a town where no one had money, where it seemed like her dad had even less than anyone else. To suddenly find that a boy was interested in her, a boy with plenty of money and who was attractive and popular. She was naive and juvenile, but she didn’t deserve what happened to her.

I felt for Ellie so badly, what she went through was horrific and then still being able to see the continued attack’s on girls. It was heartbreaking, Ellie was raped and murdered by two boys, who honestly are probably my most disliked characters in a YA book ever, how they were written was so great because I literally loathed them, they were horrible, had no remorse and thought they could do anything because they had money, and that’s exactly how I think we were supposed to feel about them.

They way it was written was gripping and thrilling and I couldn’t stop reading until I found out what happened. The injustice of the book really got to me, but I enjoyed every bit of it and would really urge you to pick it up if you think it is the type of boom you could read. 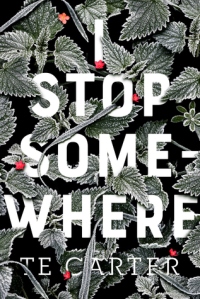 6 thoughts on “I Stop Somewhere by T.E Carter”