Meet the biggest bank on the planet…SLAY…killing it on stage and killing demons off it.

Every fangirls daydream is about to become Milly’s nightmare.

When Milly arrives home to discover that her mum has been taken over by something very evil, she finds herself in mortal danger. But the last people she expects to rescue her are the boys in the hottest boyband on the planet!

Enter SLAY – playing killer gigs, and slaying killer demons. Suddenly, Milly’s in the road with JD, Tom, Niv, Zek and Connor, helping save the world, one gig at a time… 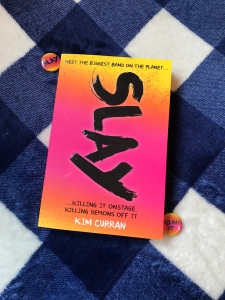 ‘Boys as swoon-worthy as One Direction saving the world from evil? Sign me up!’

If there was any quote on the back of a book it make me want to read it even more it would be this one! Boybands are my guilty pleasure, and yes I did have the 1D boys pictured in my head as I read this book! I am a huge fangirl, or well I once was, I like to think I’m not as much of one as I was when I was younger, but this book reignited that in me just a little.

Boybands and demon slaying collide in this fantastically written book, I was hooked from the first page, I couldn’t wait to delve into the world of Slay and see what they got up to! It was like 1D meets an episode of Buffy, I adored it!

The boys from the boybands Slay; JD, Tom, Connor, Zek and Niv, rescues an unsuspecting girl from a demon attack, where her mum has been taken over by a very powerful demon, Milly then, much to the boys surprise, especially JD makes herself useful in the world of demon hunting.

I loved Milly! She was fierce and jumped right into everything. She played a vital role in the band/team, she just settled in so well. I love a feisty heroine! The relationships she developed were great, especially with Tom and with JD, I’m excited to see what happens with those relationships in SLAY 2, I don’t know who in routing for!

I thought the plot was brilliant, obviously it’s a very ‘out there’ book and nothing like the type of books I usually read, but I just couldn’t put it down. The story was so well researched and written and made the whole book very easy to read, I read it over a few sittings, I probably would have read it all at once if I’d had the time!

I wanted to join in with all the action, the weapons and fight scenes were brilliantly written with great description, it really played out in my mind as I read!

And even though there were some serious moments, it was all so fun and you could really tell these were teenage boys, I especially admired Connor, honestly he was so funny! It is such an unusual storyline, not something you see everyday, but it’s brilliant, I would really urge everyone to give this a go, it has a bit of everything, action, romance, angst, diversity.

I can’t wait fir SLAY 2, to see what happens next in the world of demon slaying boybands!

Thank you very much to Stevie at Usbourne for sending me a copy! It was so very appreciated!

5 thoughts on “Slay by Kim Curran”